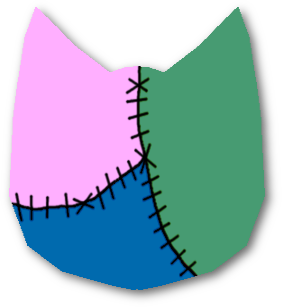 NAVIGATION
Recent Updates All About Us Our Pets Calendar of Events Gallery
INTRODUCTION
We're Zero & Cat, a couple from San Diego who like going to conventions, cosplaying, and staying busy. We both have Cystic Fibrosis and have had double-lung transplants, but we don't let that get in our way.

Our site here primarily covers our convention adventures (mainly comic & anime), be it cosplay or the various panels & gameshows we run. We also post about various things going on in our lives, including our struggles with our health issues.

Be sure to follow theCATandROBOT on social media to get notified of updates!

ABOUT US
We're Zero & Cat, a couple from San Diego who like going to conventions, cosplaying, and staying busy. We both have Cystic Fibrosis and have had double-lung transplants, but we don't let that get in our way.

We staff a handful of conventions throughout the year and we attend even more, usually in the Southern California area. While we've done everything from helping to run an escape room to assisting with the AMV competition, most of our con work is running various game show panels, with Jeopardy being our most popular.
CONVENTION HISTORY
Growing up here Souther California, San Diego Comic-Con was both of our first conventions. Back in the days when you could just casually decide to go down there and buy a ticket. Zero started attending conventions in the mid '90s, and Cat in the mid 2000s. We started doing conventions together and cosplaying in 2014, and started staffing conventions shortly thereafter. Between the two of us we've attended and/or staffed: ...and probably more that we're forgetting about.

While Jeopardy is our biggest panel, we also run a number of other games such as Charades, Cosplay Chess, Chopped, Pictionary, Debates, This or That, Scavenger Hunt, and more. We've also assisted in the designing & running multiple escape rooms, as well as an AMV contest.
© Z-R0E